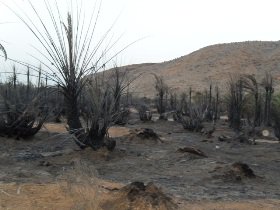 Thousands of palm trees, over twenty goats and three boats burned in Debnah Oasis,Yesterday 18th of June, 2011 by a fire blown by wind from a spot where rubbish is collected and burned.

A woman from Debnah Village burned rubbish in a spot in Debnah Oasis. Wind blew fire towards palm trees which burned thousands of them. Another story says that a woman was cooking in the Oasis. Over twenty goats were charred while three fishermen boats were melted. People from nearby villages hurried into the spot when they saw black smoke flying into the air.With support of hundreds of Army, Rescue Police and locals, fire extinguished after six hours of tackling.

Debnah Oasis is one of the biggest in Socotra, ten thousands of palm trees are grown there. It is located 15 kilometers to the north east of Hadiboh, close to Delisha beach.

Ecology
← Claudius Schulze - Support my Socotra Book!Summer Programs on Socotra →
Comments ()
Log in via social networks to leave a comment:
Do you know that...
There are many spelling variants of the name of the Island.
Our projects