The well-known blogger and traveler unsuccessfully attempting to reach Socotra

197 countries in the world, it’s taken me 10 years to reach 195. Aside from a year teaching English in Chiang Mai, Thailand and a year in Sydney, Australia during my only ‘real’ job, I’ve been on the road, averaging over 2 weeks per country. But I’ve been stuck on 195/197 for 6 months now, and it’s breaking my heart.

So what are my last 2 countries? Yemen and Norway. Admittedly, people are often surprised why Norway is still left, but that’s strategic. Ever since I reached 150 countries, I’ve planned to ‘save’ Norway for my last country. It’ll be a huge party, a big celebration and it’s close to the UK and Ireland so my mum, sister, friends etc can come and celebrate with me. I can’t exactly invite them all to Yemen to pop Champagne, now can I?! So that leaves me with Yemen. Good old Yemen. I’ve been trying to visit Yemen for more than 6 months now, and it’s been quite the adventure. 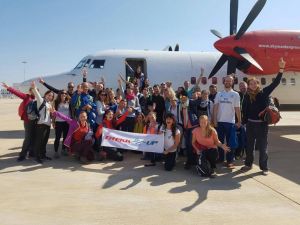 YEMEN First of all, a little context. Yemen is in the midst of civil war, and that civil war is being played out behind the scenes as a kind of proxy war between Saudi Arabia and Iran, which then again breaks down into a war between two factions of Islam, Sunnis and Shi’ites. So the Houthis (the Iranian backed Shias) are fighting the Government (Saudi backed Sunnis). Anyway, it’s a mess. And it’s awful to see, furthermore the media are ignoring it partly because the West is so chummy with Saudi (cough*, oil, *cough) and partly because white people aren’t involved therefore ‘we’ (that ‘we’ represents Western mass media, not me) don’t care. With that all playing out, I knew it was neither wise or easy to visit Yemen at this time. But after 10 years, and over a quarter of a million dollars spent, I had to try. Plus I had a secret weapon, Socotra.

Socotra ‘The Galapagos of the Middle East’, Socotra is a Yemeni island off the coast of Somalia and Yemen. And while the waters are full of Somali pirates, Al Qaeda suicide boats and Saudi warships, the island of Socotra is 99.9% safe, believe it or not. The Socotrian people are amongst the warmest, friendliest people in the world and the island itself is arguably THE coolest place to visit on the whole planet, honestly. The landscape looks straight out of avatar, the food is delicious, camping, hiking, swimming, this place is epic, and it’s going to be THE place to visit in the future, mark my words. Right now though, it’s almost impossible to access. Saudi have imposed a no-fly zone through Yemeni airspace, there are no commercial flights due to the war, visas are hard to come by and taking a local fishing boat is treacherous due to the pirates, terrorists, war and immigration from both the Omani coast, and then again on the Yemeni side. This still remains both the safest spot in Yemen and also the coolest place to visit, so this was my initial target. Eurrrgh this is gonna be tough, but I’ve been through worse. Let’s do it...

Events
← How to get Socotra: 4 days on a cement boatThe first sailors of the season →
Do you know that...
The north-western part of Socotra is planned for construction of a new sea port. The field research works are about to be completed.
Our projects