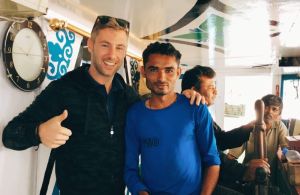 We met when I arrived in Salalah, but with no agenda, we went out for lunch on day 1, then dinner. I’m not sure if you guys have spent anytime in the Middle East, but Arabs really are the most generous, humble, warm people on the planet, that’s one thing I’m sure of from all my travels. Yemenis then are supposed to be the nicest group of Arabs, and then Socotrians (people from Socotra Island, Yemen) are the friendliest Yemenis! Anyway, you get the picture. Each day I would hang out with YahYa, watch silly video clips on his phone or mine, eat together twice a day, chat about women, politics, football, my travels, his travels, it was really nice and we had created quite a bond. I figured that if and when this final attempt to see Yemen predictably failed, the silver lining was that I had met this awesome guy. Incidentally, each meal time almost resulted in physical confrontation when I tried to pay for my own food, or drinks. Even if YahYa wasn’t eating with me, we would go out for dinner and he would disappear and pay. It came down to me having to speak to the waiter on the way IN to the restaurant, insisting that the bill came to me, ridiculously generous.

Anyway, YahYa became almost more determined than me to get me to Socotra. He was sure he could get me onto a local Yemeni/Indian/Omani fishing boat-turned-cement cargo boat that would transport cement every week or so from Oman to Socotra, at the very least he would pull in every favour, bribe who needed to be bribed, and apply pressure when needed so we would both know we did everything we could. And so the process began.

I checked into a hotel in Salalah, a hotel where they know me by name, my 3rd time staying there at length. And each day YahYa would wake up around 6am, jump in his car and run to the port in Salalah to find out about boats, then he would run to the immigration, then to the office where they deal with paperwork.

He would call Socotra, talk to their port office, their immigration, their police. Day-in-day-out. Waking up, driving from one corner of the city to the other, on the phone all day. Picking me up 2 or 3 times a day for coffee at the mall, lunch, dinner. I’ve never seen anything like it. I hadn’t hired or paid him anything, he had nothing to gain, he was super busy with his own stuff and his family, but he dropped everything to help me, I was truly humbled.

People have helped me immensely on this trip to every country, not least my mum, Faisal in Pakistan, Muad in Libya, Alfredo in Angola, Tekeste in Eritrea, all countries that I would have struggled with immensely without those guys, but this was a new level. One whole week of phone calls, paperwork, cash, documents, visas etc went by and by this stage YahYa has managed to ensure my visa to Yemen wasn’t cancelled as is normal, he had pulled in every favour he had to ensure that immigration in Socotra would accept me via the cement boat, he had organized with the Omani immigration to stamp me out of Oman and allow me to board the cargo boat, he had contacted the boat captain and confirmed that he would accept me on board and he had okayed with a local business, boat owner, that I would be allowed to use his ship, and he had organized his extended family to welcome me in Socotra if I ever made it, to use his cars and a local guide free of charge. So many moving parts, all of them who owe me nothing and only stand to deal with headaches by accepting it, but YahYa through force of will, effort, ‘gifts’ and friendship managed to line them all up. Now it was just a waiting game.

I arrived in Salalah on February 14th Valentines day (apologies to my girlfriend, and thanks for understanding!), and on Wednesday 22nd, 8 days of stress, graft, and full time work, I got the call. Time to go the port. The cement boat was almost finished loading and everything was in place.

Me being me, I hadn’t prepared anything for the journey. In all honesty, I hadn’t allowed myself to truly believe that it would happen, that my 10 year effort would finally be reaching a beautiful end. So when the call came that the boat would accept me, I had nothing ready – no water, no food, no bedding organized, I hadn’t even packed. YahYa had come to the hotel lobby and was calling me frantically, I threw all my stuff in my backpack, and ran downstairs. Gave YahYa a hug, and jumped in his car, I couldn’t believe this might really happen.

We arrived at the port, immigration was there, there were some delays while we waited for more goods to be loaded to export to Socotra and suddenly we were moving. Passport handed over, ready to go. YahYa, as a Yemeni, wasn’t allowed past the port gates in Oman so another huge hug, me thanking him profusely and promises to see him next week back in Oman and on I went, driven to the boat, 4pm Wednesday 22nd February, a date I’ll never forget.

FEARS – NOONE WANTS TO GET KIDNAPPED

As I waited to be accompanied through the port, the reality of my situation began to set in. What were previously fleeting nervous thoughts each evening had now manifester into actual possibilities. Was I stupid to be attempting this? Is this a step too far? My mind was in overdrive.

I had bumped into a musclebound, Leonidas-lookalike greek guy in my hotel in Salalah a couple of days previously, I asked him what he was doing there. He said he was there as private security to guard against piracy in the Arabian ocean. Oh shit. Trying to make myself feel better, I suggestively asked “I heard the Somali pirates had reduced a lot already though, right?”, “Yes, the pirates are showing a lot less activity, now we are more concerned with the suicide boats and the terrorists”. I should have kept my mouth shut. Suicide boats? WTf?! A quick google on that showed 2 suicide boats attack a Saudi boat off the coast of Socotra a month ago, great.

Not only that, but if you google ‘Socotra boat sinking’, as I obviously and stupidly did the night before I left, you’ll see a fishing boat leaving Socotra to the mainland sunk in December, 60 people on board, 35 dead. They overloaded the boat apparently. Heart-breaking, and terrifying.

My nerves were on end, I was so worried about the ship sinking, but even more concerned about either Somali pirates or Yemeni extremists hearing about a foreigner on an unarmed fishing boat. Such an easy target for kidnapping, and if my time is up I certainly don’t want it to be on YouTube in an orange jumpsuit with a knife to my neck, so I decided no matter what, I’ll keep my mouth shut on social media and do my best to get in and out of Socotra, Yemen unnoticed. The less people who know about my cement boat escapade the better. That being said, those 100 hours on the boat will give me ample time for fears to run through my head. Snap out of it Johnny boy. You’re on your way.

P.S. From the beginning he can rent a yacht [with girls and booze as well] and come to Socotra without any problems as all normal sailors do it and spend here the right time )

EventsSea
← More and more sailing boats make a stop on SocotraThe well-known blogger and traveler unsuccessfully attempting to reach Socotra →
Do you know that...
Some theorists of literature consider Socotra to be the prototype of Prospero Island mentioned in Shakespeare's play «The Tempest».
Our projects