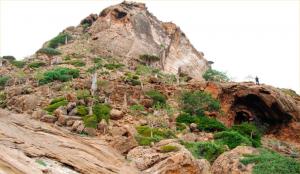 A Yemeni-Russian team that has been working together for five years in Yemen discovered last week a building on Socotra Island that dates back the eighth century A.D., according to Khalid Ali Al-Ansi, an archeology expert in the General Authority for Antiques.

Al-Ansi told the Yemen Times that the archeological site, found in the Foahr Sha’awb District on the island, dates back to the pre-Islamic period. After initially discovering the building, the team went on to find a whole compound consisting of square and circular buildings separated from one another by lanes.

Within the compoundو the archaeologists found ancient carvings bearing the south-Arabian alphabet, as well as a cluster of letters that Al-Ansi conjectures could be names of former rulers and kings. Al-Ansi speculates some of the findings date back to the Stone Age in the eastern and southern areas of Socotra.

Investigations are underway to verify the validity of the hypothesized dates.

Yemeni researchers hope to continue to work with the Russian team.  Russian archeologists have been operating on the island for three decades.

ArcheologyHistory
← We are looking for employees for Socotra.info ProjectSchedule of flights to the island of Socotra →
Comments ()
Log in via social networks to leave a comment:
Do you know that...
Socotra was a refuge for pirates for centuries.
Our projects