/ Home / Activities on the island of Socotra 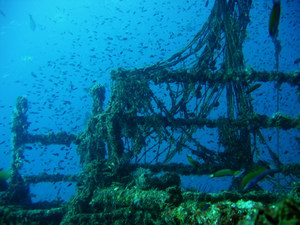 The best time for diving on Socotra is the period from September to October and from March to May, when wind falls and the sea calms down.

We have pleasure in organizing diving tours for you on Socotra. We offer you to take advantage of professional knowledge of Fouad Naseeb, the only certified dive-master on the island, who has been studying the Archipelago’s undersea world for many years.

One of the most interesting diving sites is the “Sunrise” wrack lying at a depth of 25-27 meters at the sandy bottom in Shuab Bay.

The “Sunrise” ship created an artificial reef almost in the very center of the bay, which sandy bottom and moderate depth (not more than 30 m) attracts countless numbers of sea dwellers. Here one should be careful of skates reaching up to 3 meter in diameter. The old fishing nets entangled in the ship’s gear also represent a danger to divers. Sometimes there are strong currents and low visibility. But in February-March the sea gets very calm and it is quite possible to watch tens of fish species schooling around the wrack.

This wrack is worth staying one more day in Shuab Bay to make a few dives.

Other Socotra’s diving sites are also very interesting. The most prominent ones are as follows:

We arrange both full diving trips and a few dives in a couple of Socotra’s beautiful places combined with a trip to Shuab Bay, for example.

The best season for diving on Socotra - October-November, March - May. The sea is calm at the time and visibility is good. 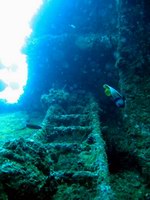 1 day
Arrival to Socotra.Transfer to Hadiboh, hotel accommodation.
Guided tour to Ayft Gorge famous for Frankincense Trees
Coming back to Hadiboh, preparing diving equipment,
having supper in a local restaurant, spending the night in the hotel

2 day
Transfer to Qalansia settlement. Two dives to the “Sunrise” wrack in Shuab Bay.
Coming back to Qalansia, having specially prepared fish supper and spending the night in the camping (tents) of Detwah Lagoon, which is definitely one of the most impressive places on the island coast.

3 day
Two dives to the “Sunrise” wrack in Shuab bay.
Coming back to Hadiboh, having supper in a local restaurant, spending the night in the hotel

4 day
Transfer to the north-eastern part of the island and staying at Rush camping.
Two dives from boats not far from Rush.
Having supper and spending the night in the camping (tents).

5 day
Two dives from boats to the wracks at the Erissel Cape.
Seeing dunes in Archer.
Having supper and spending the night in Rush camping.

6 day
Two dives from boats (Adho, DiHamri)
Coming back to Hadiboh, spending the night in the hotel.

7 day
Sightseeing tour to Dixam Plateau famous for Dragon Trees.
Going down to the canyon, swimming in a natural pool.
Coming back to Hadiboh, spending the night in the hotel.

Diving & on Darsa and Samha islands. Diving with mantas!

We invite you to Samha and Darsa islands, where diving sites are much more interesting. Here, you can dive down to 30 m nearby vertical cliffs and to swim through mantas shoals. A small village of the Samha Island is seasonally inhabited by fishermen. The Darsa Island is peopleless for the time being. We plan to spend a couple of days on the Samha Island to walk through its recreational sands and dunes, to catch plenty of fish and to admire its breath-taking views. We will try to make this trip enjoyable and unforgettable. J

To make this trip we rent two fishing boats for a few days and except the islands we plan to explore a 30-km NET Beach, which is practically inaccessible from inland, and beautiful cliffs of South-West Socotra.

The trip is going to be creatively different.

Diving in a company of mantas you will be able to feel like real explorers of the Archipelago’s underwater world.

Book a tour or ask a question

DarsaDivingErisselFreedivingSamhaSeaShuab
← Kitesurfing on SocotraWindsurfing on Socotra →
Comments ()
Log in via social networks to leave a comment:
Do you know that...
For an Adenese-Socotran expedition, in 1960 there were issued special postage stamps.
Our projects