Sounds of Socotra from ShortWaveMusic 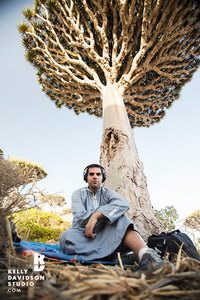 Thanks to him, we can hear the voice of Socotra.

ShortWaveMusic is a project which chronicles the sounds of regional and international broadcasting via shortwave and mediumwave (AM) radio. The 2013 season (our eighth) was recorded from March 13-23 on the archipelago of Socotra in the Gulf of Aden. A total of 59 stations from 34 countries were recorded over two weeks.

A global sound project which will promote the songs, stories, and folk traditions of the Yemeni archipelago of Socotra.

"We have not yet been able to catalogue or understand what is Suquṭri heritage and culture. It is trees, birds, mountains, etc., but it is also people and language. And if we protect the environment, but not people and language, then we hav e nothing. How can you preserve the hand without preserving the body? To save part without saving the rest is to let the whole body die." - ‘Umar Khâlid, Association for Suquṭri History and Heritage

My name is Myke Dodge Weiskopf. I travel around the world with microphones and shortwave radios to create audio travelogues of incredible places. In 2005, I started a project called ShortWaveMusic from my one-room apartment in Boston, Massachusetts. After three years of recording and presenting signals from India, Iran, China, Saudi Arabia, Bulgaria, Algeria, Nigeria, Romania, Kuwait, and dozens more, I decided that the best way to hear the world was to see it for myself. Since then, I've taken the project to Ibiza, Bulgaria, the United Arab Emirates, and the West African country of Mali.

Along the way, in addition to recording radio broadcasts from Albania to Zambia, I've captured the living sounds of regional musicians and singers out in the field, all of which are available, permanently and for free, at my Web site: www.myke.me.

Socotri
← Life of islandersTemethel as the most bright element of soqotran folklore poetry →
Comments ()
Log in via social networks to leave a comment:
Do you know that...
The most beautiful postal stamps issued for the Mahra Sultanate of Qishn and Socotra were the stamps devoted to Arab culture and folklore.
Our projects