Visiting Socotra is like going back to another time and even to another planet entirely. When visiting the only dragonblood tree forest on the island, you are surrounded by trees so unlike anything alive on Earth today, that you simply cannot wonder if you’ve gone back to prehistoric times.

On this island you’ll experience diversity and uniqueness on so many levels! When driving, trekking, sitting, on your back gazing upon the Milkyway, swimming in the crystal clear ocean, or in a stream seeping out from the countless caves. Every turn, every breath of air is something fresh and unique – like another planet altogether.

Morten Ross.  All the photos you can see  at   http://www.ross.no/communicate/tag/socotra/

This view from the highest point of Socotra – Skant – is so amazing, and it was hard concentrating on photography as the vista was ever changing – colors, sounds, scents – all physical senses. But the centre of my being was touched more than all of those.

Before I came to Socotra I didn’t know much about the mountains of the interior of the island, and thus made a mistake in assigning one day here. 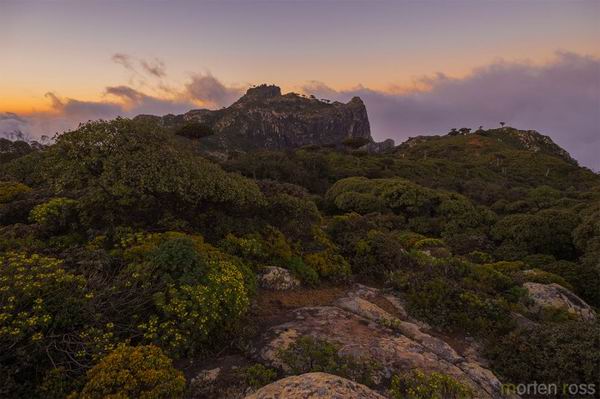 First and foremost I didn’t know it took so many hours to walk to the top, my understanding was that it was a mere 2 hour walk, but that was based on miscommunication. On the way up I passed so many wonders, and I wanted to spend hours at these breathtaking locations. The scenery and vegetation changes throughout the ascent. My guide continuously indicated the camp was very close, but he was intentionally doing so as he thought I would not want to go all the way as I only had one day. On the way up I passed at least 3 spots I wanted to camp, so with more days available I definitely would want that. If I return I would want at least 4 days here.

I will never forget the 2 days I had on top of Socotra in the Haghier mountains. This is the highest of them all – Skant – looking west. At this time there’s no Milkyway in the west, so the stars are just tiny dots on the sky. Some green airglow is seen here, though. The plan was to stay here one night, but I quickly realized that one night was by far not enough, and decided to stay an extra night here, and drop the next scheduled camp. I want to go back!! 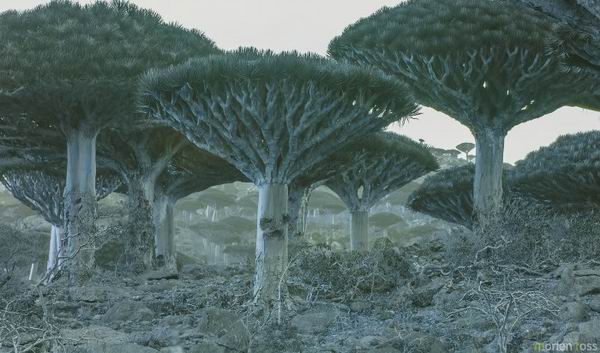 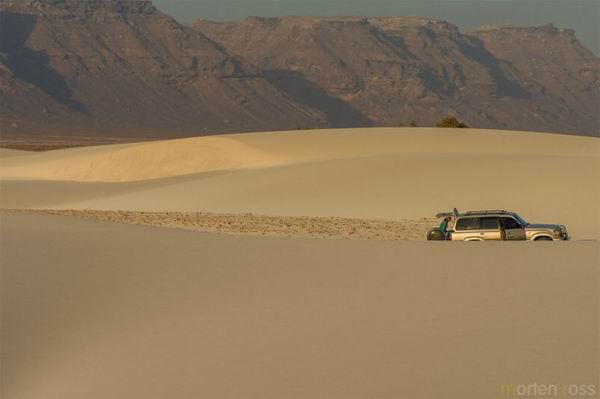 This is from the south of Socotra, and when in between the dunes you only see the sky and the sand, you’d think this is not from an island but a huge desert. I was mesmerized by the scenery! No matter where I turned my head I was in awe. In the back the sheer cliffs, and in the front the Indian Ocean. It was so alien, beautiful, harsh – it changed continuously!

I tried to capture some of it with my camera, and out of nowhere this tiny human figure turned up in the distant. Without the approaching human an important perspective is lost in the photo, so I’m grateful he turned up like a genie in a bottle – or rather in a sand dune. 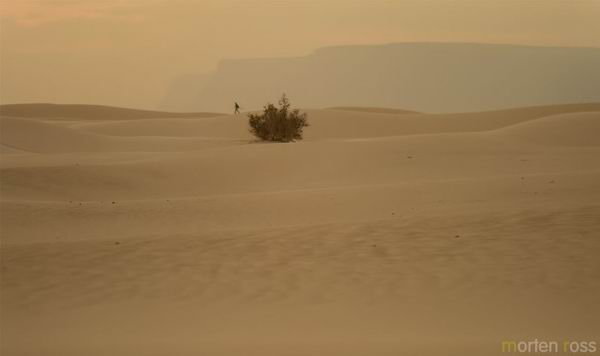 Socotra has many areas of desert-like dunes, but Stera is perhaps the one most resembling a true desert, as in many places you you don’t see the end of the sand, but walk to the top of one of the dunes and you will see the backdrop of mountains in one direction (to the north), and the Indian Ocean in the other direction (to the south).

Although Stera is beautiful in the soft evening light, it’s equally wonderful during the time before the sun makes it too hot. Add some clouds to dapple the light on the dunes, and it’s something you’ll remember for a long time. Sand, sun, wind, sea – such is Stera!

It’s a windswept place, and the dunes are here because of it. It was windy when I was here, and you can see the sand blowing off the top of the dune, making the edge look out of focus. This is nothing compared to the monsoon winds in the summer months. During that time it is very unpleasant here as everything is sandblasted by gale force winds. I camped in one of many dune-valleys here, and was pleasantly shielded from the wind.

The beach is vast and beautiful – I was completely alone – amazing! 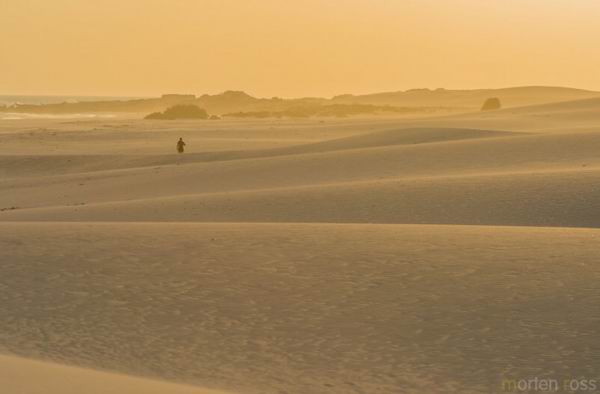 Yet another shot from my stay in the sand dunes of the south of Socotra. A short while ago I was on the plateau seen in the distant – totally different landscape. Here we’re setting up camp for the night, protected from the wind.

There are no tracks in the sand from this vantage point, but during the night lots of tracks appear. Crabs, civet cats and other animals come out and in the early hours before the wind picks up you can see many wonderful patterns. 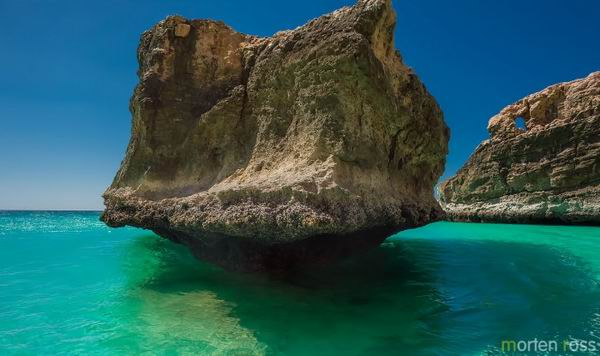 I was lucky to see parts of Socotra from the sea, and this is on the way to Shuab – one of the most beautiful beaches I have ever been to.

From the ocean you can truly appreciate the sheer cliffs, the sea birds, and most of all the fish swimming underneath your boat. I also saw many dolphins here. 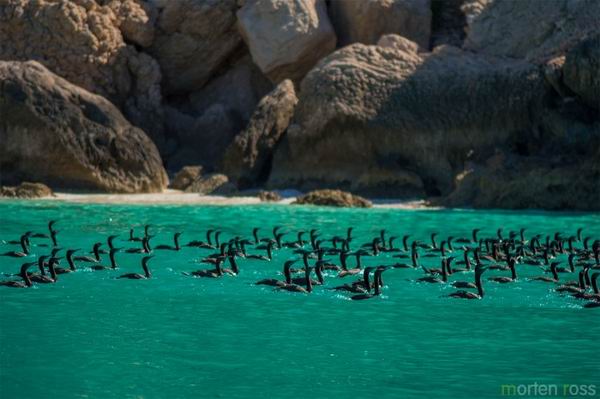 The water is as you can see on the image – crystal clear – and sometimes you can see large numbers of cormorants catching fish. The big rock seen here is one of mange boulders that was once part of the sheer cliffs rising from the ocean. To the right you can see a hole in the cliff, and this is perhaps the most unique feature of the island – millions of caves in all sizes. Socotra is in fact like a Swiss cheese! 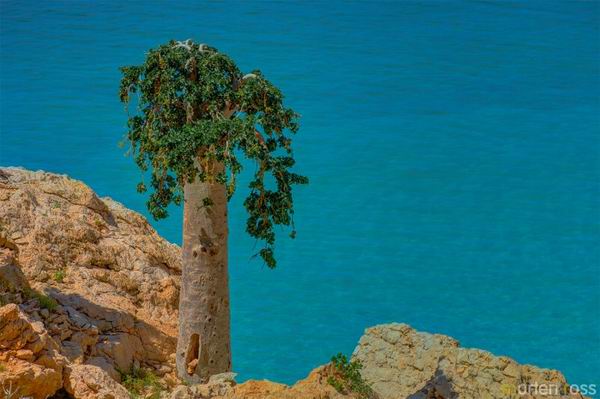 I stayed 14 nights on Socotra, and this boat trip and Shuab beach is perhaps the most amazing place on all of Socotra. 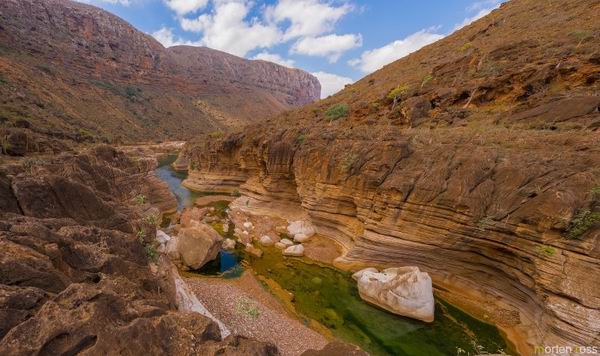 Wherever you are on Socotra you’ll be struck by the amazing landscape and flora. The key to truly appreciate it is to stay in each location for as long as it takes to feel at home with the locale and its goings on.

This river gorge is mellow now, but during the wet season the water level reach the very edge where I stand, which is around 10 meters high! The power is immense, and you can see how the water has carved out and how the eddies have formed smooth waves on the rock face. 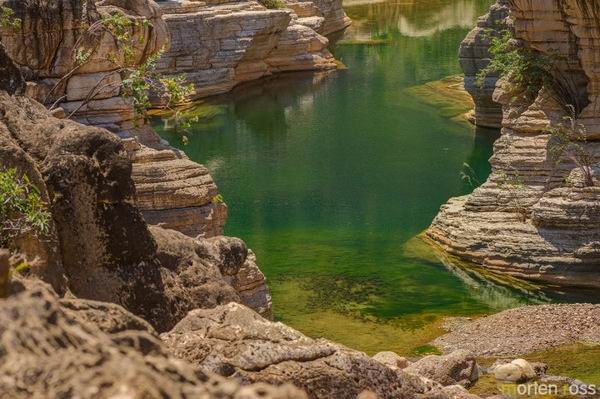 Another angle on this amazing gorge! After rain the water is much higher and dangerous to swim in, but now it’s a tranquil lifeline to inhabitants of this corner of the island. This water is home to crabs, fishes – even eels! Most if not all are found nowhere else but on Socotra!

Some evenings are more beautiful than others, but in Socotra I found beauty wherever I went and in whichever direction I looked. Here I’m standing on a hill on the eastern part of the island, looking towards the high mountains (Haghier) in the interior. When I arrived a few days ago these mountains were cloaked in clouds, so I felt lucky to stand here and see them in this amazing light.

To the left in the foreground you can see lots of the endemic desert rose or bottle tree (Adenium obesum ssp. socotranum), many of which were in bloom. 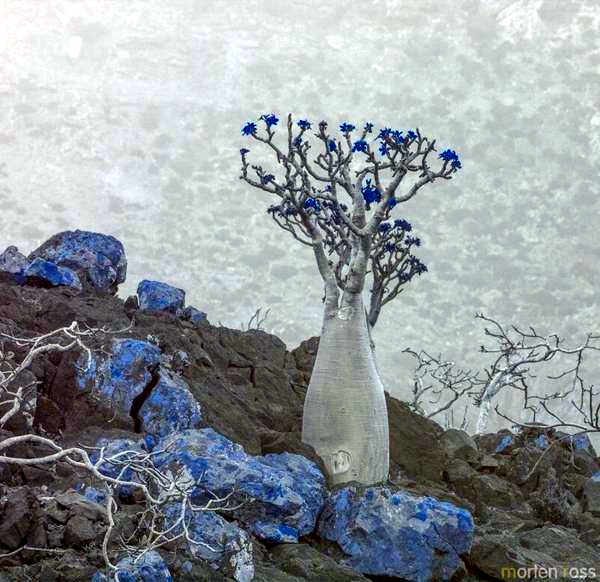 What’s interesting with this landscape view of the bottle tree, is that the flowers appear same color in UV as the lichen on the rocks! 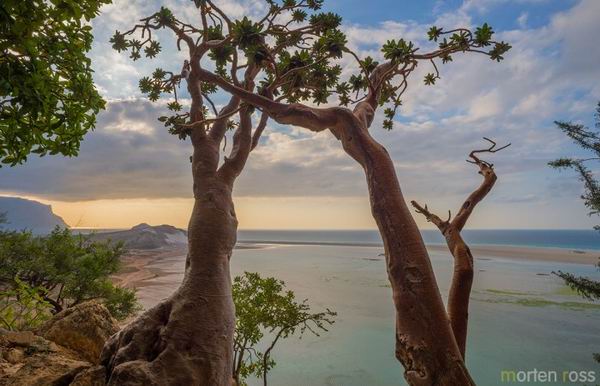 I stayed here two nights and I thought this must be the most beautiful of the Socotri beaches. How wrong I was! 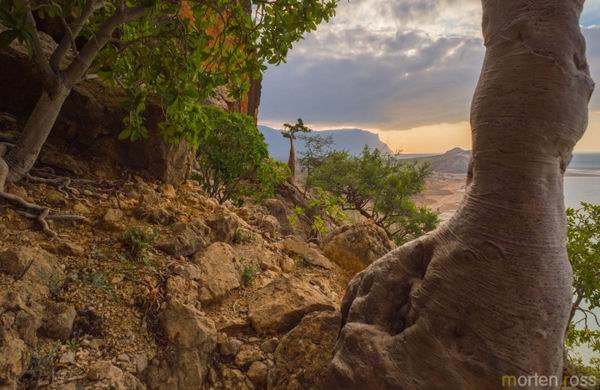 This is one of countless beaches, one more beautiful than the other – all with unique features. Here a cave north of the beach caught my attention, and this photo was taken just below the entrance. 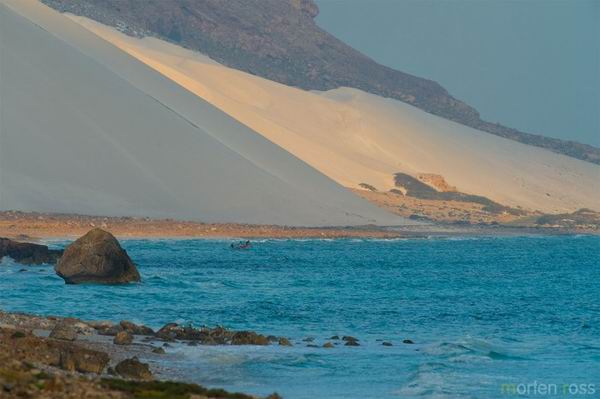 From afar these dunes look unimpressive, but nonetheless beautiful. It’s something of an abnormality to see sand dunes bordered by steep cliffs and the ocean – where does all the sand come from one might think.

Take a closer look and you’ll see two humans trying to climb it – they both sit in the photo, as they are exhausted.

It’s quite a bit more impressive when you have these human figures to compare with! In fact these dunes are many hundred meters high, and climbing them is very hard. I watched these two struggling for a long time. They only managed 4-5 steps before they dropped to the ground for a rest, then some more steps.

It took ages for them to get to the top. But it is worth it as the views are simply something that you can only find here on Socotra! 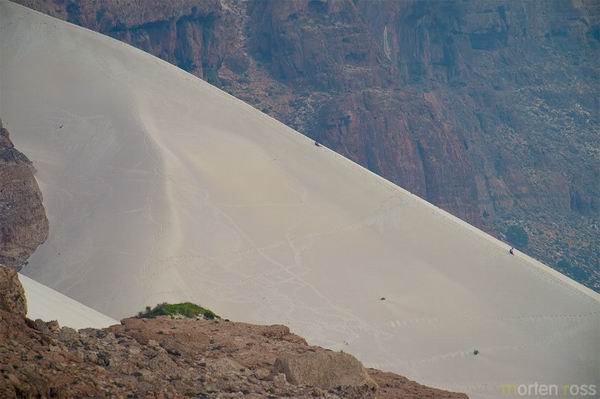 Here is another view of the sand dunes where a human construction will show the true scale of these huge sand dunes.

What makes these dunes so special is that they are trapped by sheer cliffs and rocks, and during sunrise or early morning the colors are just spectacular. 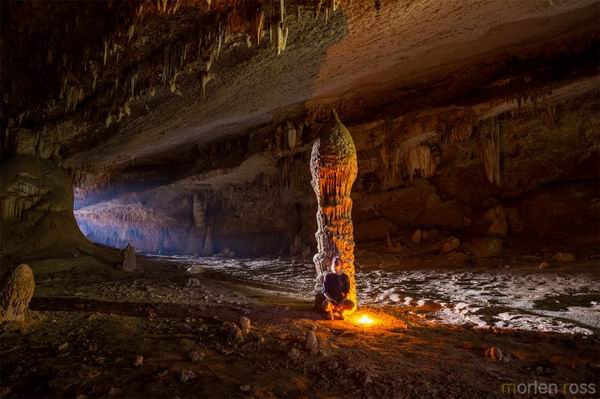 This is one of several large caves on Socotra, and evidently of the more easy ones to access. This photo is close to the end, at least for tourists. It was very hot and damp in this location. 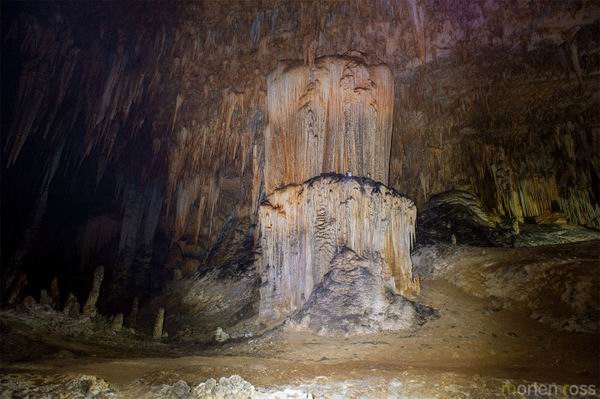 Inside I must say I was surprised how big the cave really is. Without any human or human made item in front to compare, these structures could be any size really, but the one seen here is huge! 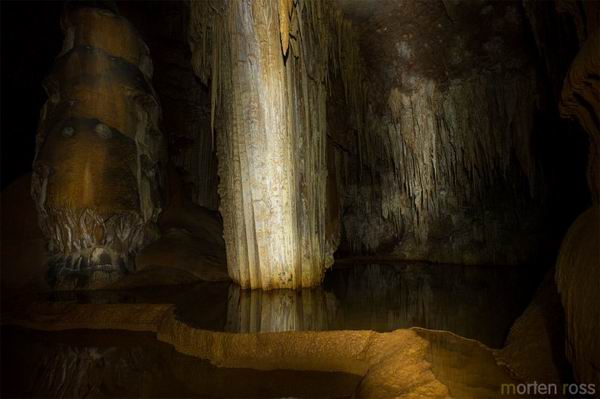 What can I say – Socotra has touched me like few places on Earth – I’m spellbound! 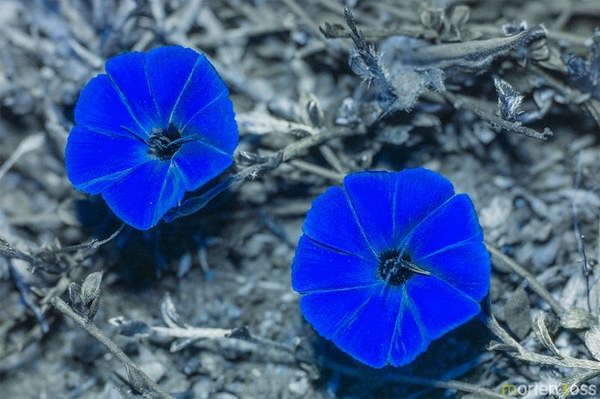 ← John LaDoga 2019Anton Nasyrov 2015 →
Comments ()
Log in via social networks to leave a comment:
Do you know that...
Socotra has a great number of caves some of which stretching for tens of kilometers.
Our projects