The Socotrans have never mastered the written language. That is why they were unable to document and keep a chronicle of their history. Since ancient times it has been only their native nonliterate language the Socotran people used for communication. Therefore, the real history of this Archipelago is still little-known.

All that we know about the island’s history is taken either from the local or world events associated with Socotra or reports on visiting the island left by various well-known historical figures or travellers.


Before 1.4 mln. years - "Homo erectus" people come to Socotra: thousands of stone tools of Oldowan technology were found in Hadibo area in 2008 by the Russian
archaeologic expedition. The discovery of the Oldowan culture of Socotra was proved by two more Russian expeditions in 2009.

3000 BC - Emerging of local navigation and sea trade off South Arabian Coast.

1000 BC - Soqotra belongs to the Land of Frankincense.

330 BC - The Greeks, sent by Alexander the Great, on advice of Aristotle, to seize the best aloe in the world, overcame the Indians who had just been on Soqotra and established their settlement on the Island.

The name of Soqotra comes, as expected, from Sanskrit "Dvipa Sukhadara" - "Island of Bliss", or from the Greek "Dioscorida" - island devoted to Dioskuri (Castor and Pollux), the protectors of seamen and sailors in Greek mythology.

1st Century BC - Diodorus of Sicily writes: Soqotra is keeping the main world supply of ladan and myrrh. Soqotra is at the beginning of the South Arabian Incense Road going through Qena and Aden.

1st Century AD - The author of Periplus of the Erytrean Sea tells: There are settlements on the North site of Dioskorida (Soqotra). Its inhabitants are Arabians, Indians and Greeks. The island is subject to the King of Hadramaut.

Circa 52 AD - St. Thomas shipwrecked there, converted Greeks, preached and built the first Christian church on Soqotra on his way to India.

582 AD - Cosmos Indicopleustes visites Soqotra. He says: the inhabitants are Greeks and Christians subjected to the Nestorian Catholicos of Babylon.

10th Century AD - Al-Hamadani writes: the Soqotrans are people from all Mahra tribes. There are 10 thousands of Christian warriors, possibly monks. There was an attack, launched by the Khawarij against other Muslims on Soqotra. Al-Mas'udi declares that Soqotra is a shelter of pirates.

12-13th Century - Yaqut informs: there is Greek settlement and pirate refuge on Soqotra.

13th Century - Marco Polo writes: the Christians live on the island but they are the best wizards in the world. They have an archbishop subordinated to Bagdad. There is active trade on Soqotra in which pirates also take part.

The end of the 15th Century - The future pilot of Vasco da Gama, Ahmad Ibn Magid, writes in his Kitab al-fawaid...: Soqotra, the tenth main island, is inhabited by Christians, the remains of Greeks. Its population is about 20 thousand. The island is under rule of sheikhs of Mahra from Banu 'Afrar. Ahmad Ibn Magid says: there is a powerful woman who is a judge for local Christians.

May, 1507 - Portuguese campain, leaded by Afonso de Albuquerque against the rebelling islanders.

1510-1511 - The Mahri attack, launched by Khamis and 'Amr, the sons of Sa'ad ben az-Zuwaydi, against the Portuguese on Soqotra.

1511 - The Portuguese withdraw from Soqotra. The authority over the island returns untill 1967 to the Sultans of Qishn from Banu 'Afrar.

1541 - The Portuguese Admiral Joao de Castro visits Soqotra and leaves an interesting description of it.

The middle of 16th Century - St. Ignatius of Loyolla, the founder of the Jesuit Order, informs: on Soqotra there are Christian services but no priests or monks.

April, 1608 - The first British ship of East Indian Company visits the new Soqotran capital of Tamarida (Hadibo) - The British merchant William Finch lived on Soqotra for three months and left some descriptions. Captain Keeling makes his "Red Dragon" ship crew to play "Hamlet" on board when visiting Socotra 1608 - it  was the first performance of the Shakespearean play in Arab and Islamic World. 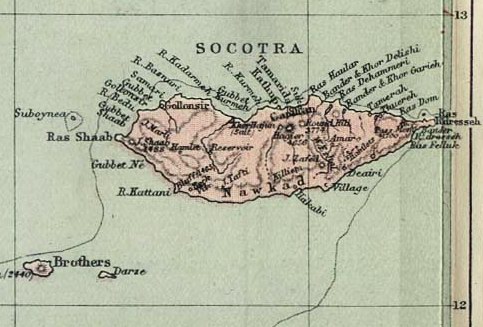 1800 - The Wahhabis seized Soqotra for a short time.

1834 - Capitan S.B. Haines of the East Indian Company Navy surveys Soqotra as a commander of the survey ship "Palinurus". Lieutenant J. Wellsted of the surveying mission records 236 Soqotri words - the first words of MSA languages recorded by Europeans. The Sultan 'Amr ben Sa'ad refused to hand over his island to the British and the island was occupied by the East Indian Company forces.

1839 - The British Indian garrison leaves Soqotra after Aden was seized.

January 23th, 1876 - Britain signs a treaty with the Sultan of Qishn , Sultan of Mahra and Soqotra.

April 23th, 1886 - Britain signes a treaty of protectorate with the Sultan of Mahra and Soqotra over his territory.

1899 - Imperial Academy of Science in Vienna Suedarabische Expedition goes to Soqotra (D. Muller, H. Forbes). Soqotri linguistic materials were published in Vienna in 1902-1907 by D. Muller and in 1913-1918 by M.Bittner.

1939-1945 - The airfield at Muri was built and the British RAF unit with Hadrami Bedouin Legion was encamped there during World War II.

November 30th, 1967 - Independance Day of South Yemen (PRSY, from 1970 PDRY).
To this very day the representatives of NF came to Soqotra - the island became a part of the new independant state, a mudiriya of the 1st (Aden) Province.

1971 - 1975 - Some development projects started: roads construction, introduction of common elementary school education (about ten schools through the island and the School for Bedouin Children ( Madrasat Salmin) in Muri opened) and public health, agricultural project in Nouged, regular air communication between Aden and Soqotra.

Unfortunately, the collectivisation of fishermen (February 9th, 1971) and strengthening of a new rule was accompanied with repressions, formally condemned afterwards by the authorities in Aden.

December, 1978 - First Parlamentary Elections on Soqotra: one deputy from the island to the Supreme Peoples Counceil of PDRY was elected from two candidates - a man and a woman.

CultureHistoryPiratesVladimir Agafonov
← Socotra in 1918 by The national geographic magazine
Comments ()
Log in via social networks to leave a comment:
Do you know that...
Like in Yemen Socotran men wear skirts.
Our projects