To Shuab Bay by jeep 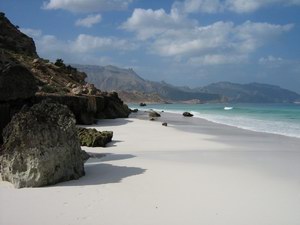 Shuab Bay is located on the west of Socotra. One can get here for 1,5 hours by taking a fishing boat from Qalansiya settlement or for 5 hours by driving a car along an earth-road. I decided to try the latter way.

An asphalt road is under construction now. So, I had a chance to enjoy a roadless terrain of the marvellous plateau in the west of Socotra and to try my new Daihatsu Rocky jeep.

Today Shuab Bay is one of the cleanest places on Socotra. It is only inhabited by a small fishing village. Here people lead rather isolated patriarchal life coming to Hadiboh only in case of urgent need.

A large bay with a shallow sandy bottom looks like being one the most fishing places on Socotra. Here one can see schools of tunas hunting for small fish stocks, shoals of dolphins teaching the young ones to team hunting, meter long skates jumping out of water and scaring away gulls and cormorants, as well as many other marine inhabitants.

It is the place where the big Sunrise ship ran upon the rocks and sunk at a depth of 25 meters to become one of the best artificial reefs on Socotra. Marine life began colonizing immediately and the ship is now home to pelagic and reef fish – from big three meter skates, schools of barracuda and tunes to giant groupers, and many other species of marine plants and animals. 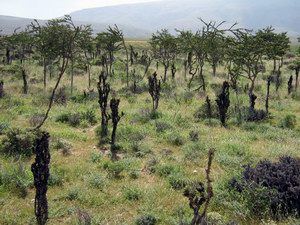 The first half of my way to Shuab Bay ran through the plateau resembling a big Japanese garden. Like everywhere on Socotra I had the impression that all the trees and bushes had been specially planted by a Sufi gardener in the order to highlight harmony of the surroundings. I sat down on earth and fell into an altered state of consciousness, almost in a trance state. At that moment I had only one desire – to get by heart this wonderful feeling of simple beauty that surrounded me everywhere. I felt the eternity and my belonging to it. My heart filled with calm, inner freedom, harmony and Christmas joy. Unfortunately, I was hurried up by excessively active and restless Hasan. So, we continued our travel, but in a few kilometers we left our car again to admire bright red flowers of aloe enjoying his life in the shadow of a Bible frankincense tree.

Getting over a mountain pass with a tough road we entered the valley of Shuab Bay where foothills remind Sinaitic mountain landscapes. Following a sand road for half an hour we reached the beach where we put up our tents between the dunes covered with greenery and mangroves.

Though at first sight the place seemed to be uninhabited, but in a half an hour we were visited by curious Socotrans who always show great interest in any people coming by a car. Hasan told them the latest news of Socotra and Hadiboh and the world over. The local fishermen asked me to take a picture of them. They invited us to visit the local sheik next day. Meanwhile we put up our tents and made a fire to prepare fresh fish presented by the locals. That day we went to bed early to wake up at dawn to have enough time for exploring the coast and to come back to Hadiboh in the evening of the next day.

The village appeared to be tiny with not more than 100 people including women and children. The old sheik, the patriarch, treated us to tea and home-made bread. Little by little the big but simple house got filled with children. They struck me by their profound respect for elders and the existing order. All children, even the small ones, queued up to greet the patriarch and did it with great dignity. The sheik asked us to take him to Hadiboh to visit a doctor. Before going back to Hadiboh we in the company of his son set out to explore the northern end of the bay.

The road ran through a broad sand beach. There were a few other fishermen’s huts on our way. Children and women were looking at us with great interest, men greeted us. By the way, it is a  Socotrans’ tradition to greet every new comer. So, even if you come to a strange place and see a local it would be a good manner to stop to shake hands and to answer a few standard questions about your name and the place you got there from. I can answer all these questions in Arabic and always strive to keep the ceremonial act on a due level. 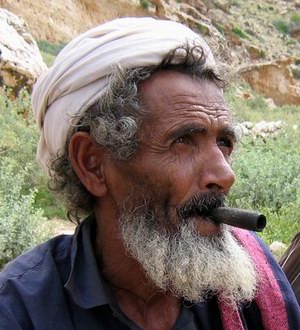 After walking about an hour along a sandy coast we reached a small grotto. Here we met an old man who had been living here for 35 years. In his cave there were a small iron box with a pair of shirts and skirts and not so many household articles – a few pots, a tea-kettle and a breadmaking sheet. However, the man looked like living a full happy life.

Seeing me smoking the old man got a package with local tobacco from his pocket and a small clay jar usually used by the Indians for smoking.

We entered into a conversation. The old man turned out to have two sons who live in the village and help him around the house. He also has two friends living not far from him. One of them interrupted politely our conversation and went to the beach to say an afternoon prayer.

I was surprised to get to know that the old man is well informed of the main world events. Though it was evident that he had little interest in the world policy and the Dollar to Euro currency exchange rate, he was more concerned about the current changes on the island and, above all, the construction of a new road.

The old man made an impression of a very happy person living in his own comfortable world. In reply to Hasan’s pointing to this grey beard and remark of inevitable coming of advancing years he jumped up and rushed along a mountain slope ike a goat showing that he was still young and strong.

I also was surprised by the birds that were not afraid of anything and came very close to us. It looked like the old man and his house were an integral part of their own birds’ world.