Socotra from above, lagoon Detwah

Photo by Dmitry Pievtsov, a Ukrainian pilot who regularly works at Socotra

On May 24-25, another powerful tropical cyclone passed through Socotra. About 19 people died, many houses and roads were destroyed. The Emirates began a company to help the island of Socotra.

The Khalifa bin Zayed Al Nahyan Foundation (UAE) has inaugurated the Hawlaf Port in Socotra Governorate, Yemen. An official source from the Foundation stressed that, as per the directives of the wise leadership, it has launched many important development projects in Socotra, most notably Hawlaf Airport and Hawlaf Port, while adding that the enlargement of the port was completed in just over one year, which is a significant achievement. The port project included the enlargement of its berth by 110 metres, as well as the installing perimeter fences, lighting, pavements, and a mobile crane with a 100-tonne capacity.

"And then came the boat, it wasn’t exactly pristine, in fact it was downright shoddy. A run-down wooden Yemeni fishing boat semi-converted to carry 8,000 bags of cement to Socotra, Yemen. It barely looked sea-worthy. I would be lying if I wasn’t concerned that it could even make the 50 hour journey but at this stage I was so happy that all the paperwork had been processed I jumped on in a hurry."

I built this boat with my own hands from the old fiberglass canoe and scrap materials. Great for fishing and sailing along the shore. This is the only sailboat on Socotra.

60-foot catamaran with a Russian-Ukrainian crew came to Socotra. They were the first who visited Socotra in the season the south-east monsoon, which still strong now.

Two more sailing boats have visited Socotra on their way to the Red Sea. German catamaran and Irish yacht spent on Socotra for about a week. It was a pleasure to meet interesting people, some of them live aboard for more than 10 years.

Sailors is lucky people. Now they are the only ones who can come to Socotra and see our beautiful island. The rest are waiting until direct flight from Dubai starts.

Socotra was hit again by the storm. A lot of destroyed houses all over the island. There are several dead. Half of our restaurant was destroyed. The ship carrying humanitarian aid ran aground during a storm.

Cyclone Chapala. Storms over Socotra - before and after

Strong cyclone passed near Socotra. We had heavy rain, strong wind and big waves. Several photos taken before and after the storm.

We made a small sailing trimaran with junk rig sail for coastal trips around Socotra.

Socotra started to receive cruisers. Our agency "Socotra Tamam" started working as an agent for sailors coming to Socotra island. We help sailors with all documents, buy food, water and fuel. And of course we showed our guests the island of Socotra.

During February-March 2015 several sailing boats made a stop on Socotra.

To the islands Samha, Darsa and abd-el-Kuri

We visited the other islands of the archipelago of Socotra. These very beautiful places are not spoiled by civilization. White sand, beautiful reefs full of fish and nice people who live in uneasy conditions.

A series of underwater photos taken during our diving expedition to the islands Darca, Samha and Abd el Kuri, a part of the archipelago of Socotra.

Sambuka - arabian boat Dhow used in the archipelago of Socotra

Sailing boat "Delta" which is traveling around the world was the first boat coming to Socotra in recent years.

We have developed a special Socotra Tour for free divers to show you the most interesting places of the island both on earth and underwater. 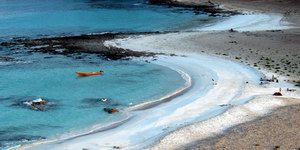 These are people living on Samha Island.

The government of the Republic of Yemen and the Kuwait Fund of Arabic economic development have signed an agreement on provision of Yemen with a loan in support of the Socotra’s new port construction project for value of 11,8 million Kuwaiti dinar (about 41 million USA dollars).

Dragon tree's resin, you can buy on the Island, has strong antiseptic and immunostimulating properties.